“Why is my Marketo slow?” In the many years working in Marketo instances, this is possibly one of the top questions I get asked.  The context is typically around load times for running reports, smart lists, and basic campaigns but more and more the performance problems are getting even more complex. Behind the scenes, Marketo is amassing a huge set of data. Each visit, click, send, data update, etc. are finely logged into activity records. If you look into the activity details for any active record, you’ll see line by line of details that can be several pages long just for a fairly recent record. It’s a big data problem and the answer to the question can be quite complex without being able to see what’s going on across a good representative sample of the data and looking for correlations within each of the records. Lots of questions come to mind before digging in. Did someone send a massive outbound campaign yesterday? Did Marketo have some server issues? Did someone change a setting? And on, and on…

In one particular case, we had a client that has an online trial for their software. As part of the workflow the application sets values such as sign up dates and specific interaction dates in order for Marketo to trigger events such as responses for signing up, some simple follow up for inactivity as well as synchronize data between the product/Marketo/and Salesforce.com. However, they began to experience a huge performance backlog which caused key pieces of data to come in a couple of days later. This threw a wrench into tracking for qualified trials as well as all the nurturing/workflow associated with the date stamps for the interaction data.

There are 4 primary teams responsible for each aspect. The marketing team was in charge of the automated campaigns and workflow, the SFDC team on the data from product to SFDC,  the Marketo support team to support the MA platform and DPI as the agency of record. It was a tricky scenario to solve as lines are typically blurred between which systems and processes are really causing the bottleneck without clear evidence to support it. Also, this affected hundreds of records with thousands of activities so going through a representative sample was not good enough nor efficient. We only knew the time period. Here’s a an abridged version of the conversations which proves how difficult it is to solve these issues:

Marketing Team: “Nothing was changed to the campaigns or the measurement of them, things just slowed down data is are taking days to come in vs. hours.”
SFDC Team: “We have not made any changes to Salesforce or the integration that would affect this.”
Marketo Team: “We saw some spikes on API counts but nothing unusual enough to cause this and the instance was not down for any period during that time.”

In order to solve this, we needed diagnostic data for the time period and for all of the records in order to understand how the system was impacted. Here were some of the findings.

For all activities for the given period, there are 23m data value changes or 92.4% of all activities in Marketo. That’s significant amount compared to what we’d expect to see. 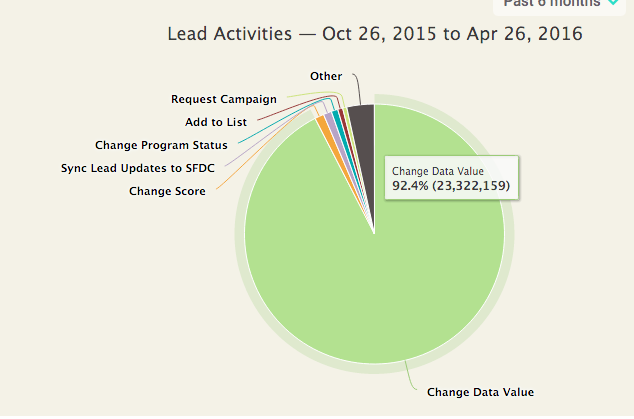 When we looked into the data value changes, they occurred on two very specific dates, November 1st and December first. 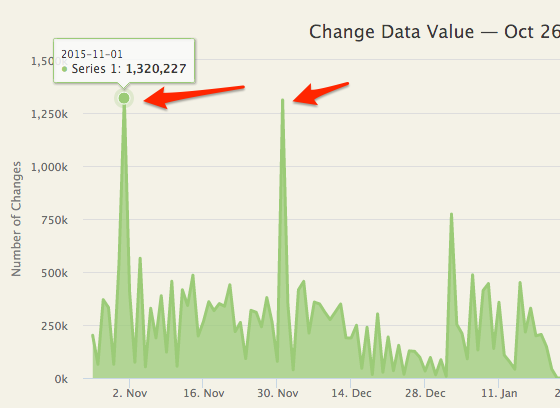 So where do these data value changes come from? When looking at the source of these, almost 96% of them were changes from SFDC writing back to Marketo. It turned out that during those two specific dates, the sync profiles for all applications that connect to SFDC were changed to add additional field visibility and was rolled out. Hence, all of the data started flooded back into the Marketo records through the bi-directional sync. 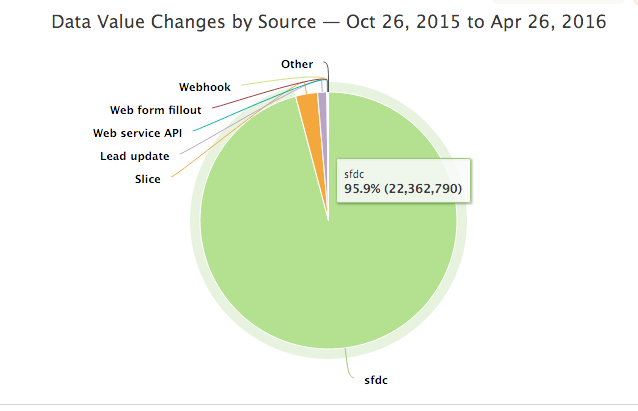 The final analysis was to understand the specific fields that were syncing back and how much activity data they represented. By looking at the specific fields, the marketing team was able to block ones they did not need coming back from SFDC. We provided a list of about 100 of these fields and all have been blocked. The result to date is a much smoother performance of the systems and so far no significant lags/bottlenecks. 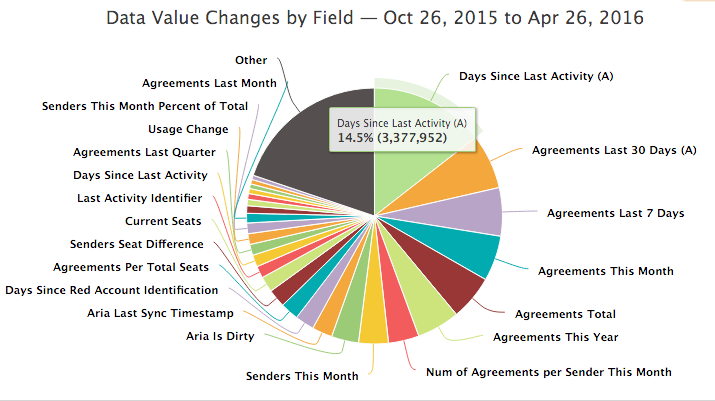 If you are curious to see how your Marketo is performing, contact us. 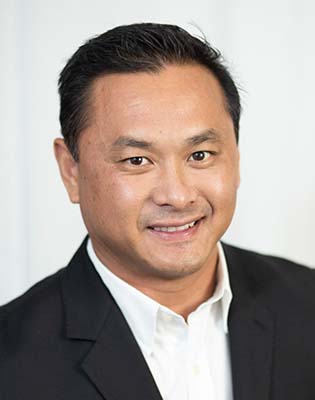 Digital Pi founder Ryan Vong puts his twenty years of marketing experience to work helping companies transform digital marketing strategy into execution and results. One of the first Marketo Champions, Ryan is a pioneer in marketing automation. He and his wife and two boys call Dallas home, exploring other cities and cultures as often as they can.
All Posts »

Creating a best-in-class marketing operations team starts with the right model. In this ebook, we'll explore considerations for when it makes sense to take initiatives in-house (and when it doesn’t). We’ll also share a model to help you plan your investment and figure out how much outsourcing costs.
Download
eBook
PrevPreviousMarketo Revenue Lifecycle Modeling Done Right Part 4 of 4: How to Test and Tune A Lifecycle Model
NextGet Chilled Party Photos and Recap #MarketoIceNext
Start something. Easy as pi.
Contact Us